The more the merrier!

I really think that the coolest part of doing all this research is finding cousins you never knew you had! It's a bonus I never anticipated.
Back when I started my research, I became acquainted with first cousins to both of my grandmothers who were closer to my age. One was G mom Masterman's cousin in Sweden, Anne Marie, and the other was G mom Caterson's cousin Janet from outside Philadelphia. Janet was the daughter of Florence, the original Mimi's youngest sister.
Through Janet I got to meet Mimi's sister, Jean. Mom, Janet and I spent the day with Jean in Philadelphia and had a great time. She was able to fill in a lot of blanks about her parents, Joseph & Krescentia (Grace) Enz. You can read a transcript from a recording I made that day HERE. She reminded me of G-mom A LOT! 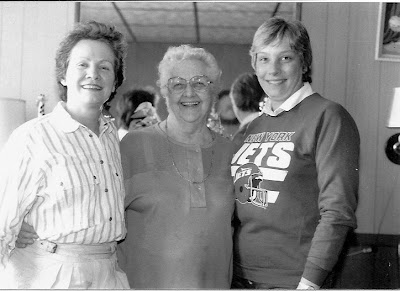 Mom, Aunt Jean and Janet, 1988
Jean was the second to last of eight daughters, and was the only one still living, but she's gone now. Our Mimi was already married when Jean came along - G mom and Jean were only 5 years apart!
Recently, thanks to the Internet, I have become acquainted with four or five new cousins in just the past month. I have posted our family tree on ancestry.com where other researchers can find the information and contact you. That way, we can share information and find more pieces of the puzzle. 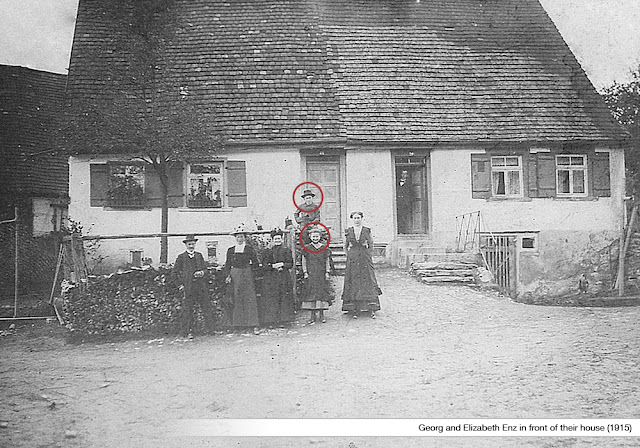 The Enz family home in Drackenstein, 1915 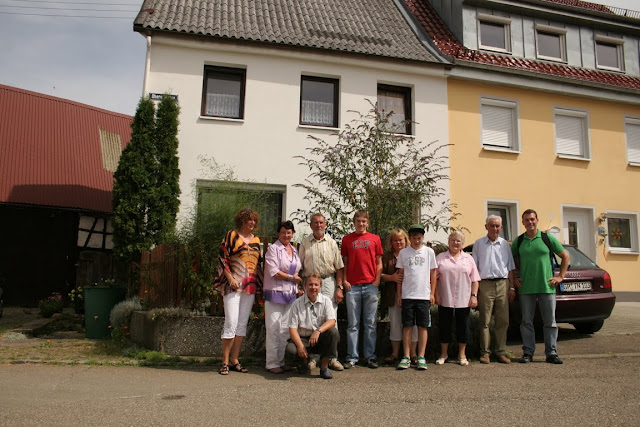 The Enz family home in Drackenstein, 2009
We have a bunch of distant cousins in the Philadelphia area that are descended from the Enz family in Germany. My great great grandfather, Joseph Enz (Mimi's father) came from a town called Drackenstein in Germany. His sister Christina and brother August came here as well. I have met three cousins descended from Christina and two cousins descended from Joseph.
The Christina cousins actually made a trip to Germany to Drackenstein two years ago and managed to meet another cousin! The German cousin is descended from Joseph's brother Englebert who had a son named George who in turn had a son named Hermann. Hermann still lives in the family house and until he retired, still farmed the same ground as our ancestors. 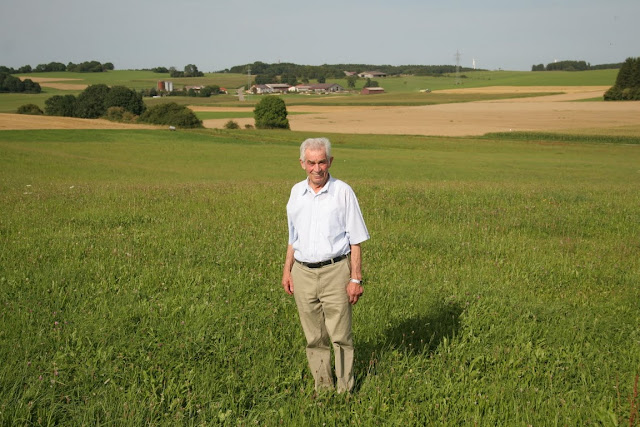 Hermann Enz, on the family land, 2009
They found Hermann by looking in the phone book under Enz in that town, went to his house, and said "Enz?" And he nodded they said, "We're Enz! United States!" And he said "Philadelphia?" He had tears in his eyes, he was so happy. He had been trying for years to locate family in the US and had not been successful. He welcomed these cousins into his home; showed them letters and photographs sent to Germany from the US and shared his family's story.
Our cousins here have stayed in touch with our German cousins and two of them came for a visit to the US last summer for a whole month. They in turn will be playing host in Germany this coming summer.
I'm putting the pics from Germany into an album and will post it on my family website. We have also started a Google Group for all of the Enz cousins to communicate with each other at once HERE. Please join if you like!
pegslist.org
Posted by Peggy at 2:22 PM