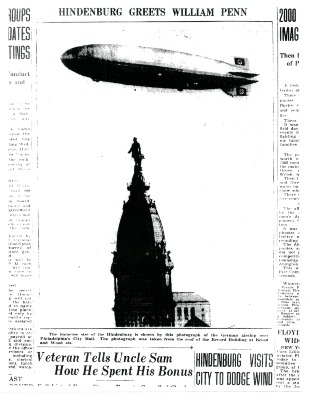 
This letter is from my great-great-grandfather to his nephew George Enz in Drackenstein, during a very historic time in Germany's history. This was written the day after the Hindenburg disaster in 1937. 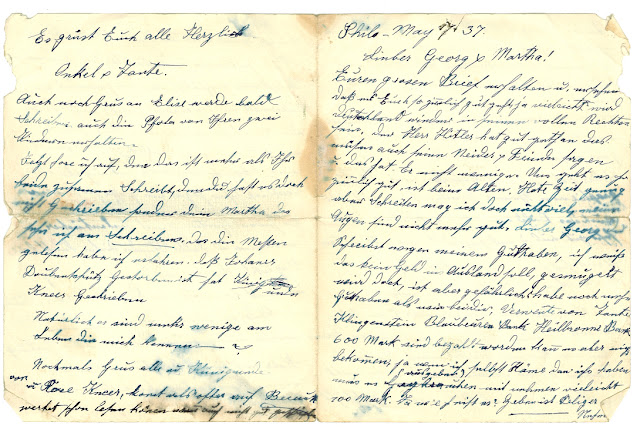 Page 1
Phila May 7, 37
Dear Georg & Martha!
I received your big letter and I saw that you are doing quite well. Maybe Germany will have her full rights again[1]. This Mister Hitler did quite well – his enviers and enemies have to admit that, too, and they are not few. We are doing quite well, nothing new. I did have time enough, but I do not like writing since my eyes are not good anymore. Dear Georg, you write because of my balance. I know that no money is supposed to be sent abroad. There is smuggling going on, but this is dangerous. I have more money on the bank than what is with you. Relatives of your aunt Kingenstein: Blaubeuren Bank, Heilbronn Bank, 600 marks were deposited, but I am not able to get it. Maybe if I came myself then I could get it. I would have to spend use it. I could maybe take 200 marks with me. Is that not too much? Giving is better than taking.
Page 2
Dear Martha and Georg, how are you doing, I hope you are fine and you carry on. Your sister Mary, is she still alive? Forgot her uncle utterly, it was different 12 or 14 years ago, but she seems to have forgotten that. Is she still a widow? I hope she is doing well, say hello from uncle and aunt. Elise did write me, too, with a photograph of her 2 children. They look good. I received the picture from your 2 children as well; they look very good and are nicely dressed, you did well. It seems you got a good wife and this is worth much more than a fortune. I was in Veinland [sic] a couple of days ago. Helen has 2 children, too, and a large flower farm. They want to go to Holland in the fall. I do not know whether they want to go to Germany. They do not have much time because of their business.
Page 3
Dear Georg, please greet Minister Burger. I sent newspapers and postcards about the Hindenburg Disaster[2]: how the burned out skeleton in flames landed at the mooring mast[3], how it flies over Philadelphia and the crew with swastika[4] flags very clearly visible. It is an English American newspaper, but everything clearly visible: the passengers looking out and waving with handkerchiefs and half an hour later this dreadful disaster. Lachword[5], N.J., the landing place is not so far from Phila, half an hour to three quarters of an hour, of course with the car machine. I would like to know whether he received the newspapers. I received a post card for my name day[6], but nothing since then.
Page 4
Many cordial greetings to you from your aunt and uncle.
Please say hello to Elise, I will write her soon, too. I received the photos of her two children, too. I will stop now, because this is more than you two write together. Because you did not write it, it was your Martha - I see that because of the handwriting. I heard that the Masses were read. Kunigunde Kneer wrote that Johannes Dauberschütz died. Of course there are only few alive who know me? Again, greetings to all and to Kunigunde from Rose Kneer, she visits us often. You will be able to read it even though it is not written well.


Here is newsreel footage of the disaster:

George's son Hermann, who still lives on the family's land in Drackenstein, shared these Hitler-era photos with us. I have no idea who they are, sorry! 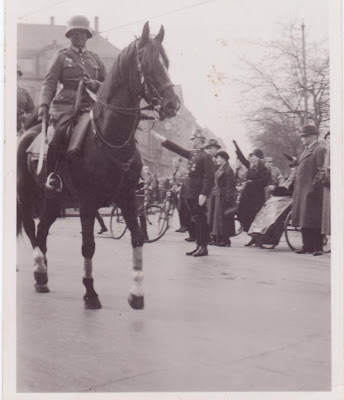 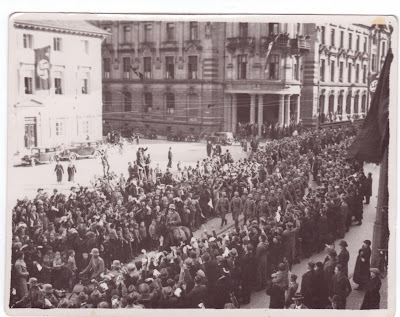 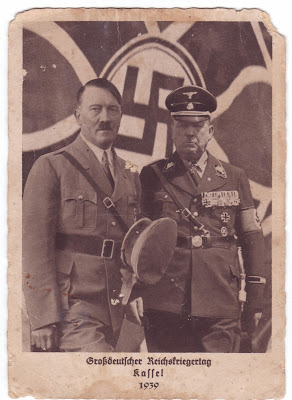