I admit it. Until recently, I didn't really utilize Land Records much in my research. What a mistake! Property records are RICH with genealogical information.

No matter what happened to church, civil, census and other mainstream records, you can count on the property transactions to be reconstructed first. Land was, and is, important. And many are available on the Net.

Look at the above deed's (from MD State Archives) first paragraph: It says so much! It tells us that Richard & Nicholas Hopkins are brothers; that their father is Gerrard, and that his will in which he left them this property was written in 1741. It also tells us where they lived at the time, although you must take old boundaries into account.

I recently found, just by dumb luck, that Philadelphia's property records are on line, and have been for 5 years! No mention is made on the City Archives website of the free indexes or the subscription-based deed books. They also have "Parcel Explorer" on which you can trace the chain of ownership of an address from 1865 forward to the present. (You do need to be aware of street name changes.) 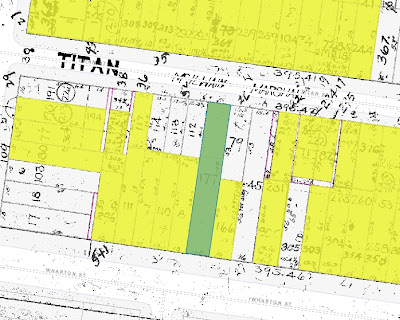 Detail of Parcel Map for 531 Wharton. Green highlight is the exact lot with lot number.


These very documents lead to me finding the brother of my 3x great grandfather and his family. Charles R. Phillips (my 3XGG) died in 1857 while his children were young. His wife and kids lived with his parents, Richard & Margaret Phillips. When Richard died in 1861, he had a will written just one day before his death, leaving property to his wife, sons William B. & J. Wills Phillips, his daughter Mary Jane Carpenter, and the children of his deceased son Charles R. Phillips. (read this story HERE.)

Until last month, I could not find J. Wills Phillips, and I had been looking for a year! I found a likely death certificate for a John W. in Philly in 1864 (it showed his residence as the same address his sister lived at one time). But really nothing else. No census, no city directories. The other siblings were easy - not J. Wills darn it.

So when I found the deed indexes, I located several for Margaret Phillips, who was executrix of her husband's will, along with John Kinsley. I looked up each deed and to my delight, found this: 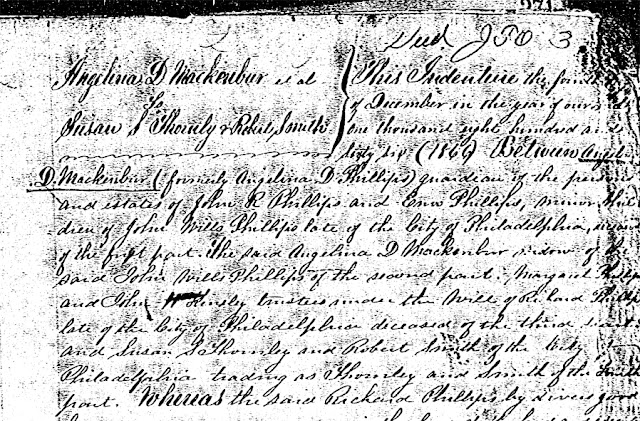 In 1866, Angelina D. Mackenbur, widow of John Wills Phillips, is asking for the sale of the property left by Richard Phillips to his son and therefore to her 2 minor children, John H. & Enos P. Phillips of Washington, DC! (She had subsequently married a Joseph Mackenbur in DC.)

Now I was off to the races! Found John in the Census in DC (I remembered seeing the 1860 one, but had no proof it was him.) Tracked his descendants forward and got in touch with some of them. All because of one deed! Still don't know why he was in Philly when he died, but oh well.

Property records also helped me knock down a brick wall in New Brunswick, Canada. Family Search has the indexes and deed books online for free and I was able to track back 2 generations on one line, thanks to the inheritance by sons of their father's property.