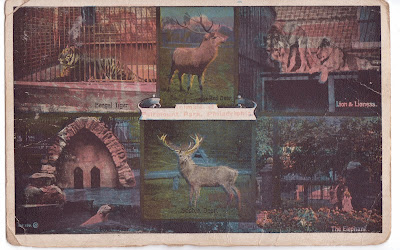 Animals at Fairmount Park Philadelphia
Yikes, I started a blog entry 2 or more weeks ago about my Danish roots, but once I started, I was woefully devoid of information. So I started digging into it, and guess what? I'm still digging! So while I piddle around with them, I better post SOMETHING before too much time goes by.

I've gotten some more boomerang letters translated, so here is a post card and a letter from my great-great grandfather Joseph Enz to his family in Germany. I'm going to seriously cry when these are finished, they are like a present every time! 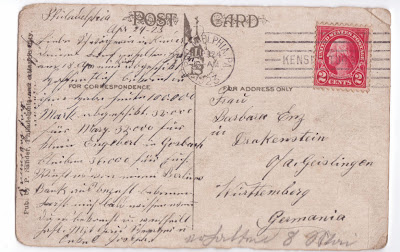 Frau Barbara Enz in Drakenstein
Municipal association Geislingen
Württemberg
Germany
received May 8 (in pencil under the address)
Philadelphia Apr 24, 23
Dear sister-in-law,
I received your letter. I sent a letter on April 18. Hopefully you will receive it. Today I sent 100.00 marks. 32.000 for Mary, 32.000 for little Engelbert in Gosbach, that leaves 36.000 for you. It will be paid out from my bank in Berlin. Please let me know soon once you received and dispersed it. With greetings, brother-in-law and uncle Joseph.
Side: Did you receive my letter?
=================================================
This one is from August of 1930:
Side: We did not have any rain for four weeks, everything is dry.
Page 1
Aug 9, 30
Dear sister-in-law,
I just wanted to drop you a couple of lines since you had visitors from America and I heard nothing from anybody. Not a single letter neither from you nor from Elise - I do not know what is going on with you. Don’t you have time? Or were the visitors unwelcome?  I wrote Elise a letter via registered mail and postcards and I did not see anything. I have not seen Helene Schneider yet because she and her family live 40 miles away from Philadelphia. But I have not been to Vineland, N. J., anyway (pronounced Weinland). Maybe later, when I‘ll get a week of vacation, for I am still working every day – every night actually. I have oversight over a club house connected with a theatre, cinema and billiard hall; beer cellar and so on. I work from 9 o’clock at night to 7 o’clock in the morning. I do not have to work much, but I have to go up and down the stairs and make sure everything is in order. They tried to break in twice, but I was on my guard. I can eat and drink whenever I want.
Page 2
I wish you had what goes to waste here and what gets thrown away. Despite this, many families are in distress. The unemployment is terrible; it has not been so bad for 40 years. The outlook is bleak. Despite this fact it is the richest country in the world where many hundred thousand million dollars lie around and they do not know what to do with it. It is a fact that where there are millions [money], more come to it. This is about everything I want to write.
Kind regards to you, your brother-in-law Joseph Enz (please write soon)
Dear Georg,
I am glad that you found the time to write some words. You are old enough now to think about the words you are dictated (or which are written for you?). Good, that you know____. This aside, how did you like Miss Helene? She is a fine beautiful girl, just like a wife for you. And with about 150.000 marks (30-40 thousand dollars) - but this might have been a little too much for you. What in the world should you do with that? You would have to come to America more often. Helene never would become a farmer. I still have a lot to write, but I will finish now. I wrote this to you in a Club House last night.
Greetings to you, your uncle
I enclose a dollar; you can go and see Gosbach.
If you want to, you can go dancing, too.
(Helen was Joseph's sister's grandaughter. Nice matchmaking! It didn't work.)

I was curious about Fairmount Park, so I Googled it and found out it is America's first zoo! It opened in 1874 after being postponed by the Civil War. Admission was 25 cents for adults and 10 cents for kids.
The MGM lion retired there in 1931, they opened the first Children's Zoo in the western hemisphere in 1938.
Cool stuff!
Posted by Peggy at 3:22 PM 0 comments