Our Own Swedish House Mafia 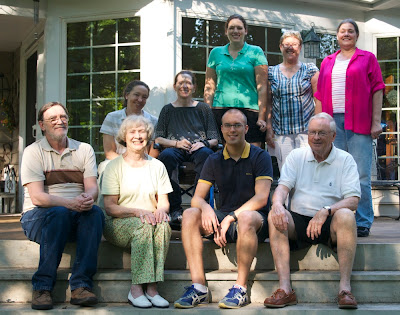 No, not the musical act, but actual cousins of my father's from Sweden, here in the US for a visit!

Twenty-something years ago, my grandmother had given me the addresses of two of her first cousins in Sweden, from where both of her parents had emigrated. Her mother, Jenny Margreta Gustafsson, and her sisters had left behind their parents, a sister and one brother, Gustaf Hjalmer, who was much younger.

Hjalmer married and had 2 sons before losing his first wife. He married again and had a daughter, Anna Maria. My grandmother had stayed in touch will all 3 of them over the years. She and her sisters had travelled there several times.

I started corresponding with Anna Maria in the 80's while our children were very young. We shared information back & forth, but eventually lost touch.

This spring, someone had copied some info from my Ancestry tree from this family and I wrote them to say I had lots more not on there. She wrote back to say that her cousin, Anna  Maria, would be more interested in that! She was referring to my grandmother's cousin  - I was so excited to be put back in touch with her!!

Well, we emailed back & forth a bit, then she told me her son, EG, would be in the US for 3 months working. As he was only going to be 1.5 hours from me, I offered to have him meet his many American cousins! We Skyped ahead of time; they both speak English really, really well! 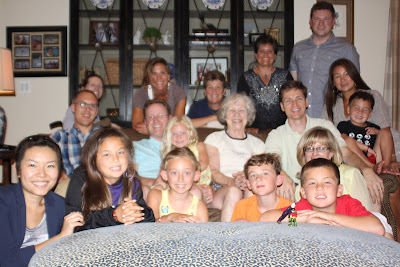 Needless to say, we've had a blast this summer! He attended a few family gatherings before finding out that his mother had decided to hop on a plane to meet us all too! (I guess we hadn't overwhelmed him too much) Anna Maria came for a week that was chock full of family and fun! 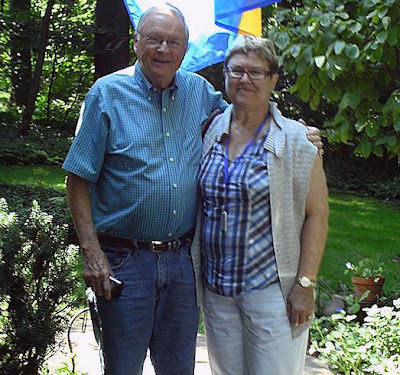 My dad with Anna Maria (note the Swedish Flag!)

We held a luncheon at my parents' and invited my grandmother's sister's granddaughters whom I had never met. They brought photos and stories and were thrilled to be all together. That was also the first time I met Anna Maria, which was fabulous. My face hurt from smiling so much! 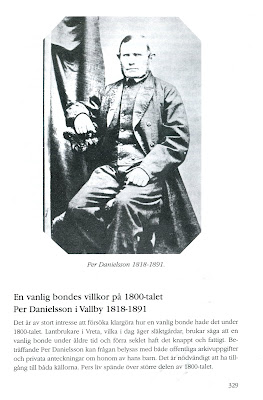 She brought with her some incredible family treasures for us as well. Wonderful photos of ancestors (scroll down to bottom), some original paintings by a local artist of their town, a hand-painted Swedish horse, a book written about the town (Vreta Kloster)  the family lived in written by a grandson of my 3x great grandfather. It even features a whole chapter on him - -  of course the book is in Swedish. I will be working on translating that, you can bet! 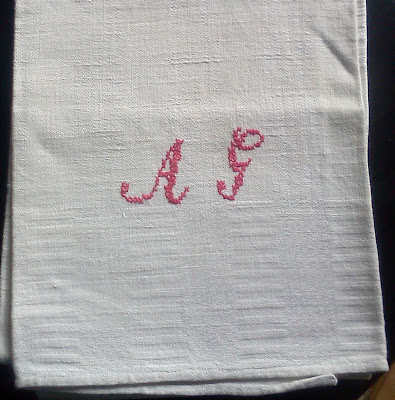 But the pièce de résistance was a linen towel. Not just any towel. This one is very special. My 2x great-grandfather, Nils Gustaf Gustafsson planted and harvested the flax, extracted the fiber, spun it into thread and wove the fabric. And his wife, Anna Sofie,  embroidered her initials on it. Wow. What an extraordinary gift! 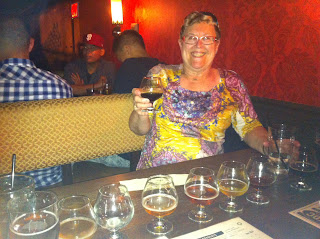 We took them on a tour of Washington DC, which they found amazing; tasted the best craft beers and local cuisine there. They then headed to spend 2 days with my parents at their house on the Wye River, where they boated, crabbed, took a tour of the Eastern Shore (and my fave town, St. Michaels) and just got to know each other.

Anna Maria & EG headed to Philly for a walkabout, then to the airport the next day as she headed home to Sweden. After that, we had a farewell party for EG, and went to an Orioles game. EG leaves tomorrow and we will miss them both. They had a wonderful time here and said they will be back!

In the meantime, we have an open invitation to Sweden :-)

Getting to meet and spend time with these relatives from so far away truly enriched my life and I am so grateful for it. 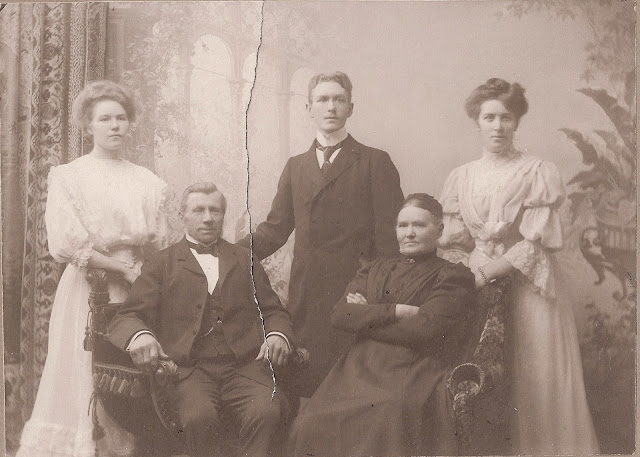 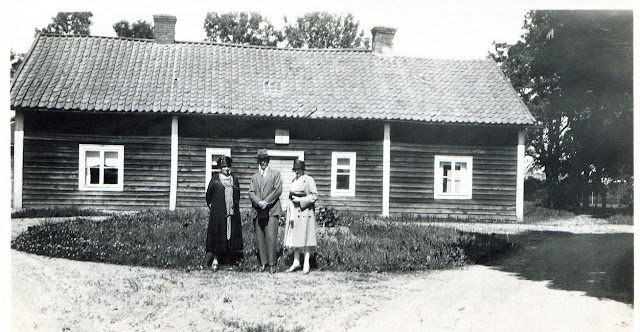 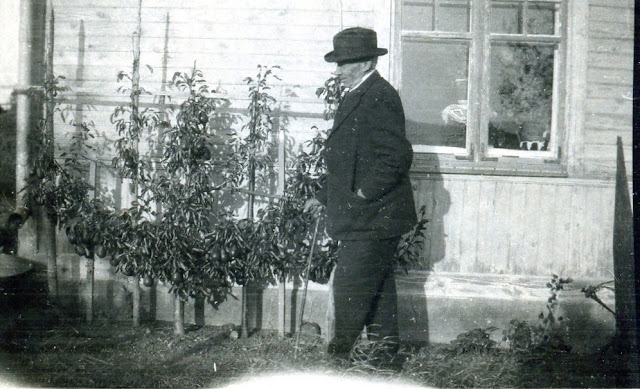 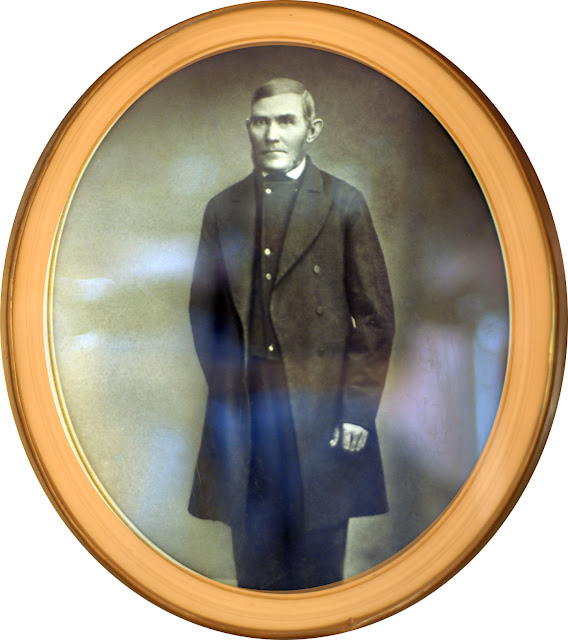 Per Danielsson, my 3x great-grandfather 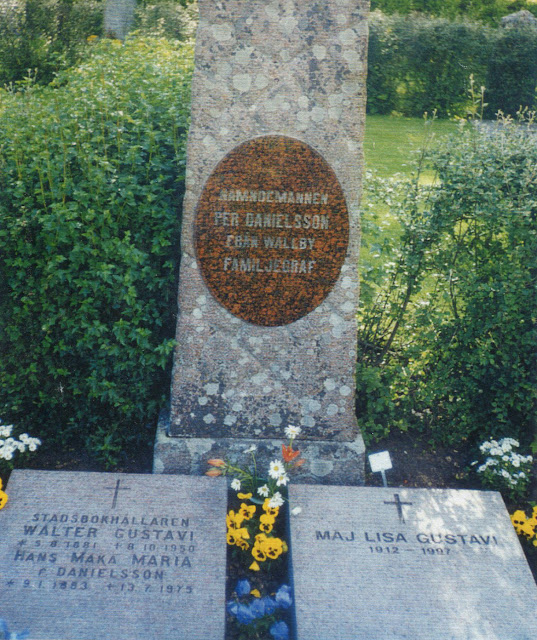