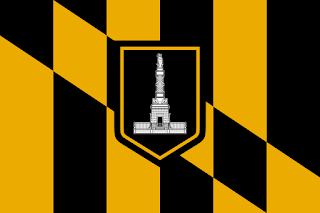 Having finally identified the parents of my 3x great-grandmother Rebecca Skillman in the past year, Jacob Skillman and Elizabeth Clackner,  I was subsequently led into a whole new fascinating family. Or five!

Jacob and Elizabeth were married in 30 January 1823 in Baltimore and, according to the newspaper notice, had at least 3 children before Elizabeth died 9 November 1834 at age 32. (I've not identified the other 2 children.)

So Elizabeth Clackner was born on March 27, 1802 in Baltimore, the first born of Adam Clackner, Jr and Rebecca Gill. With a unique name like Clackner, I was hoping for some easy finds (for once) and I wasn't disappointed! City directories, deeds, wills,  and newspapers laid out the Clackner family grouping:
Father Adam Sr and wife Elizabeth, their children Adam Jr, Catherine, Lydia, Hannah, Joseph and John.

Both Adams were stone masons, but Adam Jr actually owned a quarry on the north edge of Baltimore. When he died in 1818 after a long illness, his wife Rebecca ran the quarry herself until her death in 1847. During the time that they owned it, they supplied stone for several high-profile projects in town (more on that later).

The absolutely coolest find was 6x great-grandfather Adam Sr's Revolutionary War pension file on Fold3!! Not only did it contain handwritten letters from his son Joseph with amazing details of his life, but also a copy of his original commission in August, 1776 as a 2nd Lieutenant in a Company of Foot in the 3rd Battalion of Associators in the County of Philadelphia!! And it is signed by John Morton, then Speaker of the PA Assembly, who later authored a large portion of the Declaration of Independence. 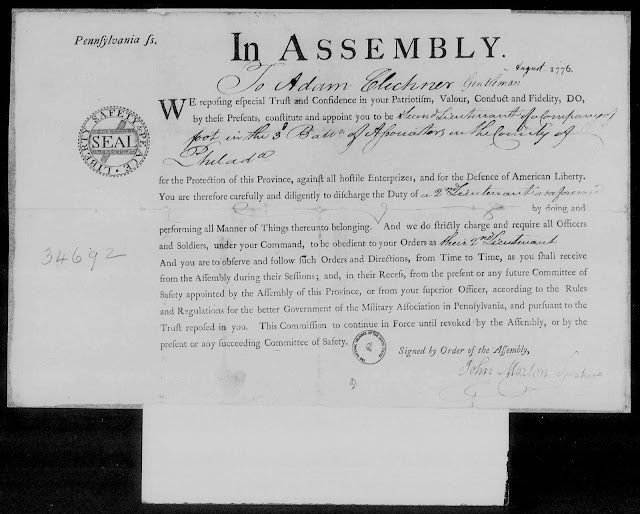 The rest of the file is chock full of info, including that the US Government later discontinued Adam's pension due to his owning property, despite being unable to work and having to support his ill wife and son. Joseph was a great letter writer, demanding explanation for their change in his eligibility. His pension does not appear to have been reinstated when he died in 1826.

Now, more about Adam Jr: As a quarry owner and mason, he submitted estimates and bills to the Baltimore government for building bridges, installing curbstones and supplying stone for other projects. One such project was the magnificent Battle Monument.

The Battle Monument, located on Calvert Street, was started on 12 September 1815, a year to the day after the Battle of Baltimore during the War of 1812, which honors those lost.  It was the first monument in the country to commemorate a battle and is featured in the flag and Seal of Baltimore City. It lists each person's name on bands that wrap around the column and Lady Baltimore stands atop it.

Recently Lady Baltimore was removed and replaced with a concrete duplicate, but the original can still be seen at the MD Historical Society. 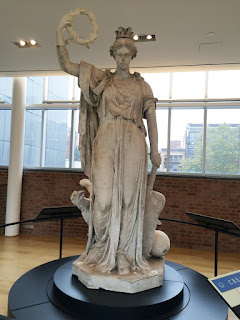 A recent trip to the Baltimore City Archives garnered me this document: 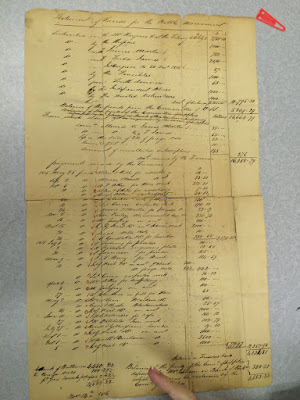 This is a list of income and expenses for the Battle Monument! There are two line items to A. Clackner for stone; one for $250 and one for $68.

Here is an proposal he wrote to build a bridge: 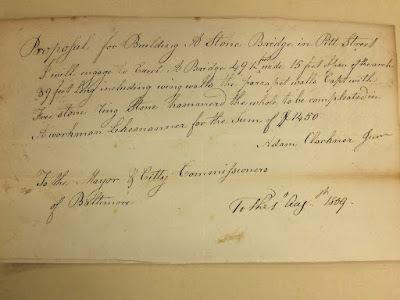 I found lots of documents like this thanks to the City Archives WPA Index which you can find HERE.