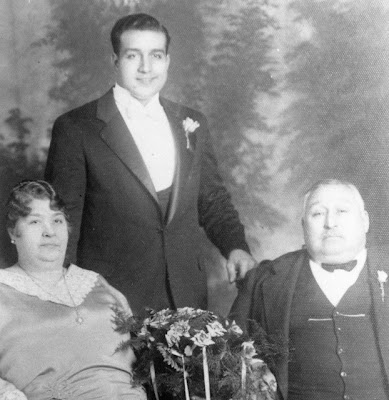 Yesterday was my son's 28th birthday. Besides making me feel old, it also makes me nostalgic. (I'm such a sap!)
I named my son James Culotta Ingles after his father's maternal grandfather, who's name in Italian is something like Giovanmario Guglielmo Culotta.( I think his mother's surname  de Liberto was in there somewhere too.) We called him "Nano."

The photo above is his wedding day, pictured with his parents.

I haven't ventured very much into Italian research yet, but I know a few generations of Nano's family. 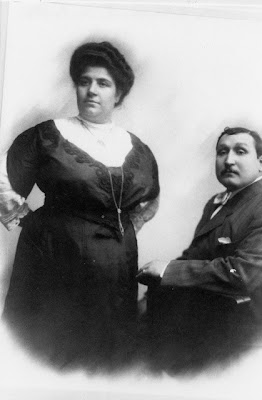 So this James Culotta was born Sept. 10, 1907 in Baltimore, the son of Ferdinando "Frank" Culotta and Concetta Teresa Liberto, photo abovee. Frank had emigrated from Sicily in 1890, she in 1896 and were married in Baltimore in 1898. 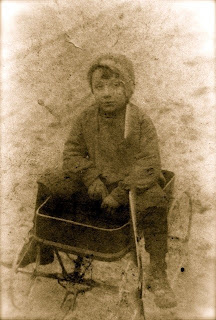 They had 7 children, but lost a son, Joseph, in May of 1908 when he was hit by a streetcar, pictured above. At the time, Frank owned a saloon and was very active in local politics. 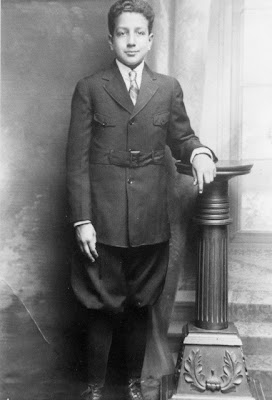 In 1914, Nano and his family returned to Cefalu, Italy for a short time, I believe to handle some family business there. I remember Nano telling a story about swimming in the ocean and drowning, only to awake on the beach in the arms of a man he had never seen, and never saw again. 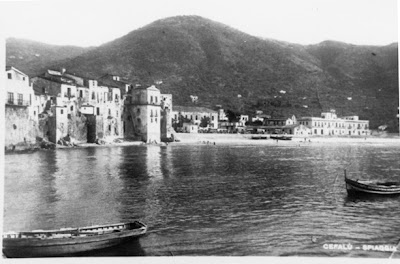 Cefalu
They came back from Italy around 1920 and continued to run a saloon/lunchroom. Nano later worked there with his brother for many years on the lunchroom side while his brother worked the bar side. They were the only place in town that served blacks and whites side by side. It was located at Pratt & Light.

Nano married Marie Kohlerman on October 19, 1930, they had five girls and just one son, Jimmy. When Jimmy was 19, he was hit by a bus and killed in Baltimore City. So tragic. That's why I named my son James Culotta, to carry on the name in a way.

Nano died in January, 1988, two years after his wife. He was a really special man and I miss him. 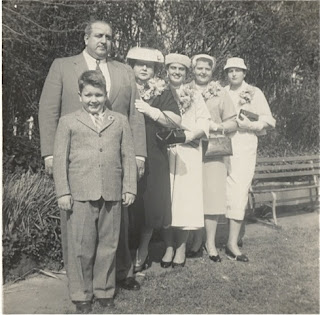 Easter 1957
I'm looking forward to getting this Italian side more fleshed out, but am more concentrating on US for now. Stay tuned! 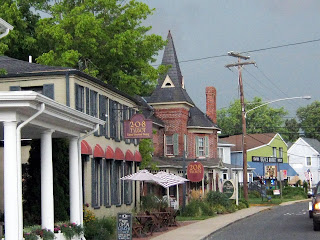 I spent a day last week in the historic town of St. Michaels on the Eastern Shore of Maryland. As a kid, my family sailed there many times. During the 70's, this town was nothing like it is today....the big attraction then was The Crab Claw Restaurant and the little Maritime Museum.

Today, the town is full of beautifully restored houses lined neatly along the streets, dotted with antique stores, B&Bs, and cute shops. And the Maritime Museum is huge, taking up several large buildings. Dick Cheney & Donald Rumsfeld both own large estates there. 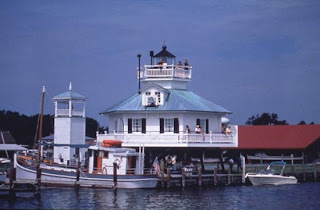 Founded in the mid 1660s, it was a trading post for tobacco farmers and fur trappers. It was laid out as a town in 1778, many of the houses date from this period. From the 1800s through early 1900s, it was a seafood processing/packing and shipbuilding town.

During the War of 1812, St. Michaels became known as "the town that fooled the British." Notified of an impending attack, they hung lanterns high in the trees, causing the Brits to aim their cannons over the rooftops thereby missing their homes!

St. Michaels figures prominently in my kids' family history as the home of the Marshall/Coffin/McMahan families. Their great- great-great-grandmother, Caroline T. Marshall, was born there in 1826. She was the daughter of Greenbury and Hester Ann (Cockey) Marshall, both born in that same county and married in 1817.

Caroline married Obed M. Coffin of Nantucket and had 7 children, including one set of twin boys. Obed died in 1865, leaving Caroline a widow. You can read the story of his death HERE.

The Marshall/Coffin families were sailors, shipbuilders and oystermen for the most part, as were most of the men of St Michaels. Caroline & Obed's son, Greenbury Marshall Coffin (1854-1932) made quite a name for himself as the builder of competitive racing log canoes, including the "Belle M. Crane," the canoe to beat for many, many years at the races. HERE is an article about a model made of the famous canoe.

Belle M. Crane
There are some Baltimore Sun articles from the 1890's about Greenbury's boats HERE  - click on the "+" sign to enlarge. The Belle raced into the 1920's.
We hunted through the Museum to find the model pictured in that magazine article, but didn't see it. But we did come across a silver cup trophy, won by Greenbury Marshall Jr. (uncle of Greenbury Coffin) that he won at the first canoe boat race on the Miles River ever held in 1859! 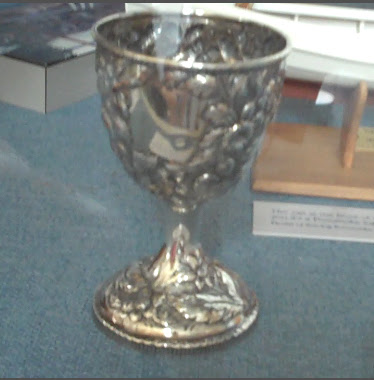 From what we saw in the canoe displays there, these races were wild! And highly competitive.

I had visited there last in 1989 or so, finding Caroline and a few of her children's graves at St. Lukes Church, formerly known as Sardis Chapel, located on the square in St. Michaels. We perused the church records there, finding an entry where, in 1869 Green Coffin was dropped from the rolls for "walking disorderly." (What??!)  They also showed us a subscription quilt, used for fundraising, that included William Coffin's signature (one of Caroline's sons) in addition to hundreds of other signatures of members. 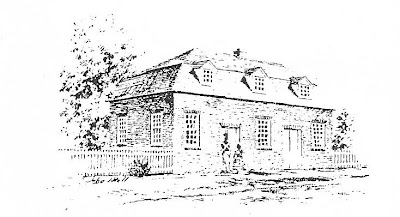 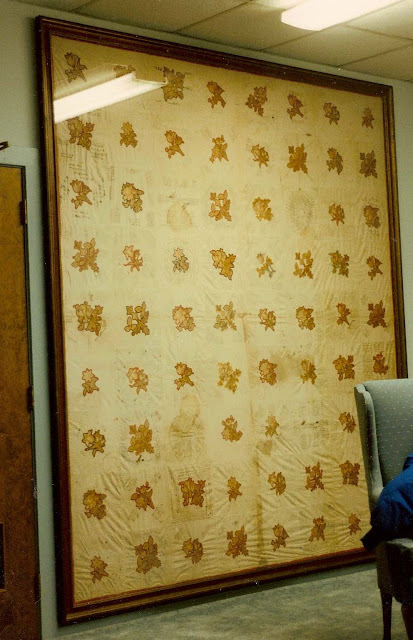 William Coffin's signature (just above crease to left of flower) 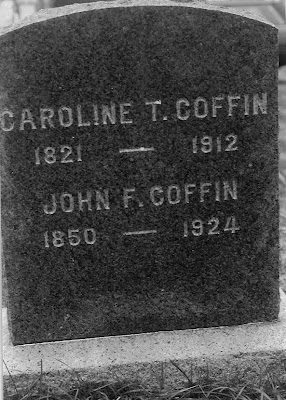