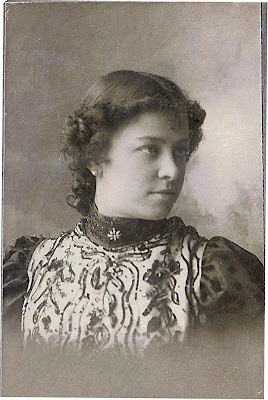 As I've said before, one of my favorite things to do is to find living cousins. One such example began with trying to find out more about my great-grandmother's sisters. Her name was Pauline P. Hopkins and she had three sisters with which she was close.

This was back when I started family research, in 1987. The first thing I did was ask my grandfather, since they would have been his aunts. In his typical fashion, he did not have much to say, darn it! So I asked my grandmother, his wife. She told me that one was named Maggie, one was named Dell, and one they called Beck, which was short for Rebecca. I have in my notes that she told me that all three were married to men named William. She also told me how many children that each had. But I didn't know their married names. I don't remember if she told me their names, but I did not have them written down. I think at the time I wasn't really interested in collateral lines, but of course since then,  I have learned just how important they can be!

More recently,  when I decided to try to find them, my first place to search was the census. I found them with their parents, Melvin and Pauline Hopkins. But after that they were in the wind. I asked my mother if she remembered any of their last names and she came up with Elser for Adella. She was right, I managed to find Adella and her husband William Elser. I tracked down her granddaughters and we are planning a get together this spring

But the other two sisters proved a lot more difficult. I remember looking at the Social Security death Index for a woman named Rebecca that would've been born in March 1844 and living in the Philadelphia area. I found one that fit the bill, with the last name of Noblit. I then looked for her in the census, and in 1940, there she was with her husband William. I asked my mother if that name sounded familiar to her and she said perhaps. But no luck in previous census years.

So one day I bit the bullet and sent away for the Social Security application of this Maggie's son Leander. When that came back and confirmed that Margaret Hopkins was his mother, I was excited. From time to time I would search and dig through obituaries and try to locate someone still living that was related, but the last name of Taylor made it sort of tricky.

Last year, when Ancestry released all of the Pennsylvania death certificates, I found Maggie and located her burial plot at the same cemetery as my grandparents. When I requested the plot card from Fernwood, I saw that she had a son named Melvin, (her father's name) and a daughter who died as a baby named Pauline, (her sister's & mother's name). Now I was even more determined, but still had no luck finding any descendants.

Just last summer, I contacted a woman that had Maggie on her Ancestry tree. She told me that her cousin was Maggie's granddaughter. I was so excited to finally find someone! I called this lovely woman named Helen, and had a wonderful conversation with her. She loves hearing all about the research I've done, and although she's 88 years old, she is as sharp as a tack and remembers everything! She sent me wonderful photos and filled in lots of blanks for me. This photo is Maggie, her husband and one of their mothers. I like to think it's her mother as the pose is very personal. 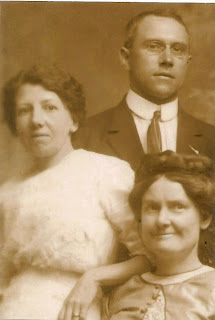 Still, I was bummed about Rebecca. (She was named for her grandmother, the long-suffering counterfeiter's wife, of whom I am very fond!) I tried to find a death record, an obituary, a marriage record, any clue at all, but had zero luck. I was starting to doubt this Noblit woman was my Rebecca.

So I again bit the bullet and ordered her Social Security application - it was my Rebecca! I renewed my efforts to find her and happened upon a 1910 Census in Philly of William Noblit with a wife Elizabeth. I jumped over to FamilySearch to check William Noblit's marriage record, saying out loud "OMG what if they were both married before?!" and there it was. He was married not once, but twice before he married a Rebecca H. Placket in 1932!! (I found Elizabeth's death record from 1919, after which he married a Florence Powell.)

So the digging commenced - sparks were flying as I clicked through records, learning more and more about Rebecca, her first husband Louis and their children. They had 5 or 6 children, but only 2 boys survived into adulthood - Melvin and Joseph, named for her father and her uncle. A set of twin girls were born prematurely (Pauline & Rosie) in 1904 and survived 1 and 3 days, not unusual at the time. But then things got a bit weird.

On a newspaper search, I found this in a Pittsburg paper dated 17 February, 1925:

Another news brief said the petition for divorce was filed with him being charged with desertion since 1913.

I'm confused - the 1920 Census showed Louis and his sons living together - no Rebecca. She is a roomer in another household, working as a laundress. In 1930, she is living at a Methodist Home for the Aged, working as a waitress. Louis is in Atlantic City, married to an Ida, with Melvin living there as well. Shared custody or preferring their dad, we'll not ever know.

I tracked their two sons forward in time, Melvin was straightforward - 1940 shows his wife and 2-year-old daughter in Atlantic City. Joseph was married with  4 children (Louis, Pauline, Rebecca & Frank) in Philadelphia in 1930. But I could NOT find him in 1940! What did pop up was a family with all of the same names & ages, in Philadelphia, but their last name was PERSICHETTI. I knew his father Louis Plaket was Italian, so maybe they went back to their real family name…not sure.

Then I found a news article from 1931 that may explain it. Joseph Plaket was arrested, with some other guys, for conspiracy to manufacture COUNTERFEIT MONEY! History repeats itself. 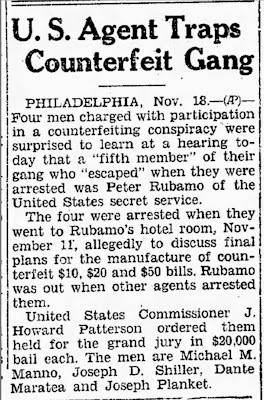 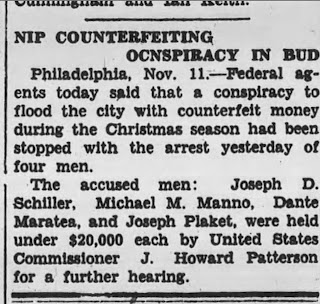 I have contacted Melvin's grandchildren and hope that as they go through their recently passed mother's belongings, we can help each other by sharing info.

Joseph's son and daughter are still living, and although I spoke with his daughter's daughter briefly, they haven't called me back. I just sent a letter with photos and info, hoping that they may contact me someday.

Check back soon for my newly focused search for the original Rebecca's family!!