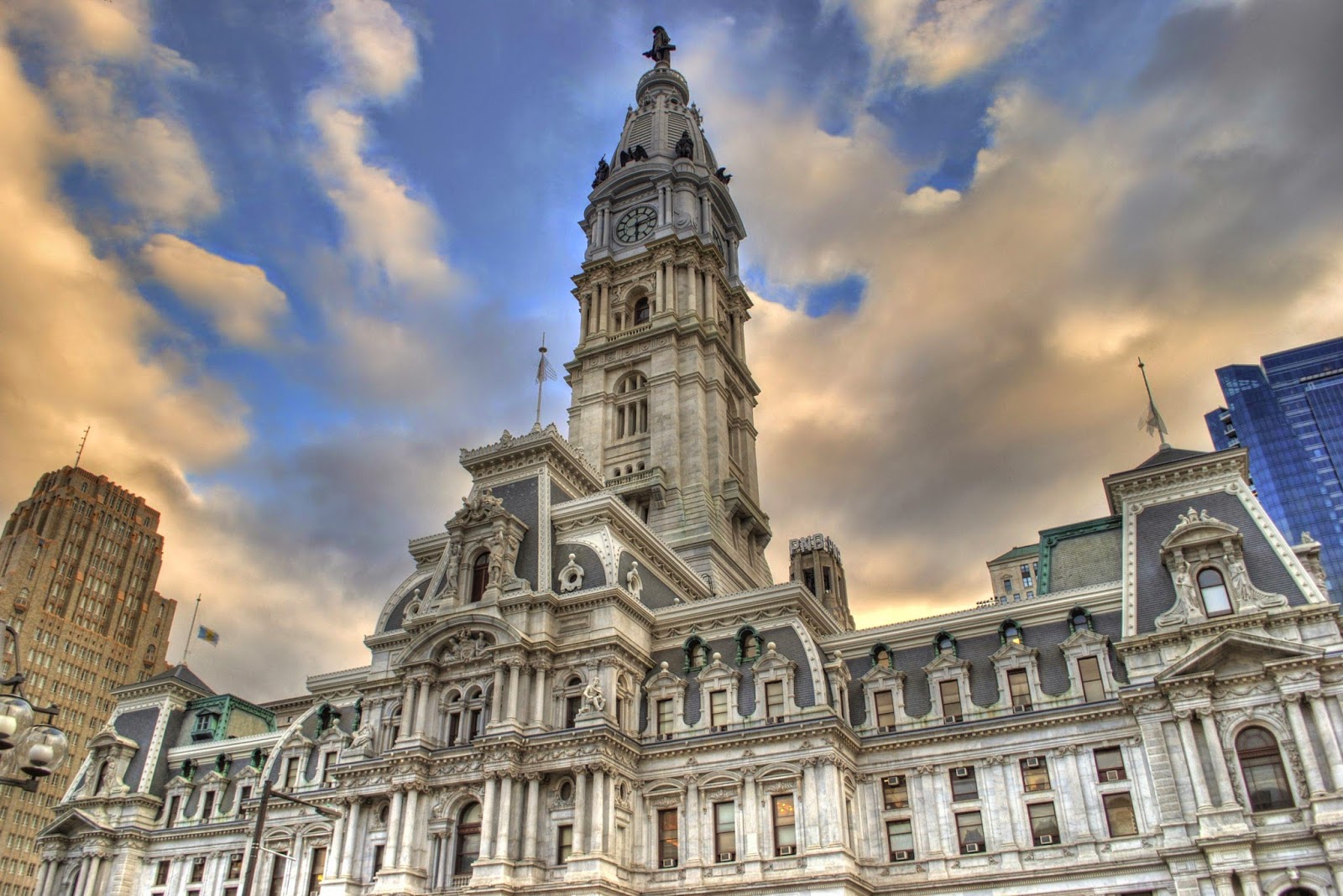 
In the past few weeks I've had some killer breakthroughs in this elusive Phillips family. Yes, sometimes the angels smile down on City Hall.

I finally got the chance to order (I should say reorder) the probate file for William Phillips, Sr. Back in December I had asked for it and the Register of Wills in Philadelphia told me they didn't have any file for him.

Since my professional genealogist had made a list of several of the names I was looking for from the wills index when she visited there, I again asked for the file of a William Phillips from 1861, hoping it wasn't the guy that died three days before him of the same name!

Lo and behold, I got a file. But it was confusing. Two or three of the papers included had names that I recognized from when I first educated myself about every William Phillips in Philadelphia during that time period.  There was a wealthy William Phillips that bought a lot of property and died in 1845, and I remembered his sons names were Clement and Clifford. Well those were the names on these papers. (The last accounting of his estate wasn't until 1864, which explains how it wound up in this file.)

I was briefly disappointed, thinking here we go again, I got the wrong file. But then I noticed on one paper the name Mary Ann Hocker, which was my William's daughter's name! As I looked through the pages, I realized that the rest of the file belonged to my William. YAY!

They were mostly the accounting of his estate, such as who got how much money, who they had to pay funeral expenses, things like that. His son William Jr. was named the executor, which helped me out because then I knew he was still living in 1861.

Throughout these papers it mentions William's will, but there was no will enclosed. What the heck? There was also an interesting line on the account that said William, Jr. had traveled to Bradford County and back and it had cost $20. I wondered what was in Bradford County? It also mentioned the names of people to which he had loaned money. I made a list of them so that I could research later and see if they gave me any clues.

I shot an email to the pro genealogist and asked her was it possible that my William's will was in the file for the other William. She agreed that that could be likely. Our chance of recovering his will depended upon whether they were mixed up after the files were microfilmed in the 70s or if they were mixed up back in the 1800s. She agreed to check it out the next time she was at their office.

Lucky for me,  she (along with the most wonderful employee there - Claudine) found the missing will! It was an amazing handwritten 3 page document. And oh my gosh, what a treasure trove of information! The question about Bradford County was answered; William Sr. owned a 100 acre farm in Bradford County, Pennsylvania upon which, I found out later, his son Joseph Phillips lived! 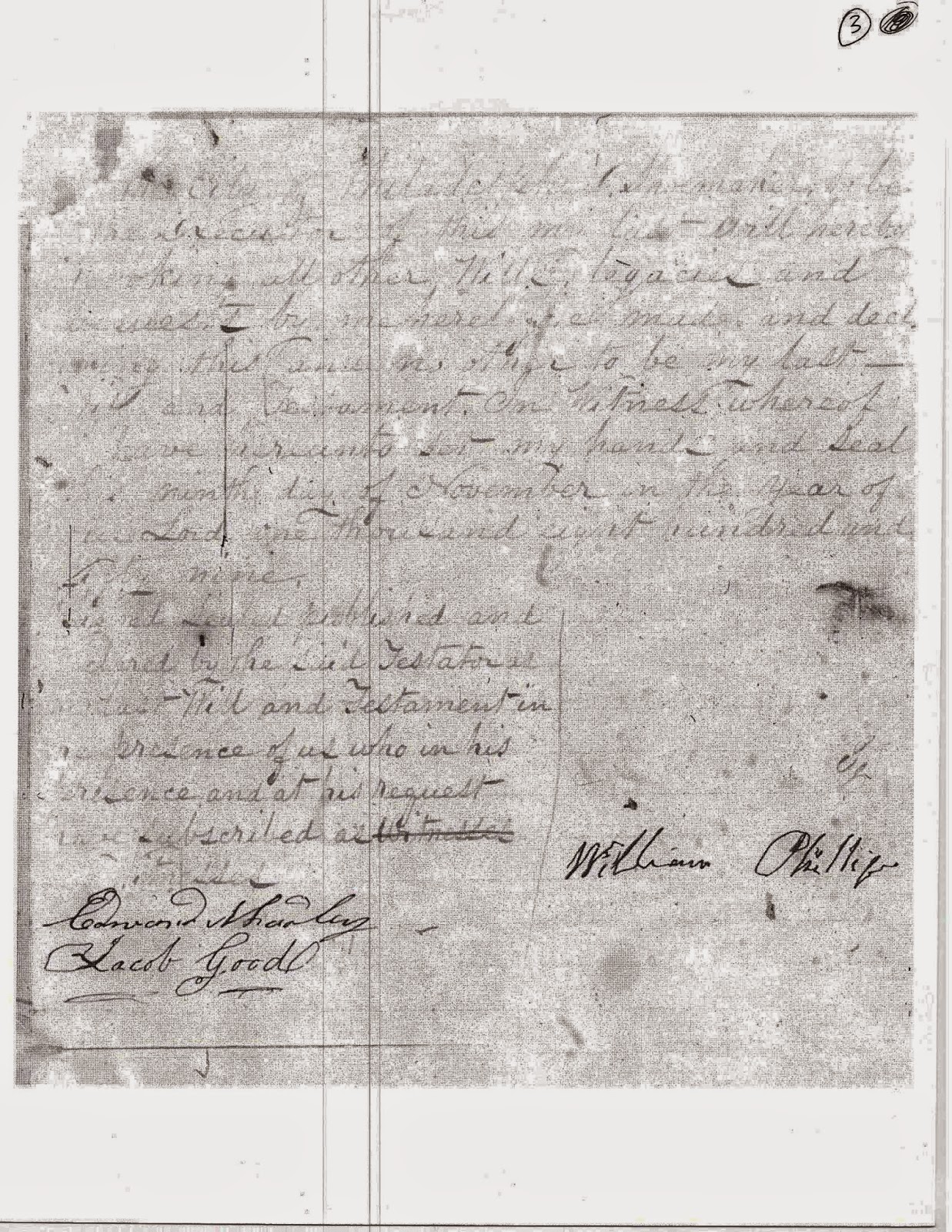 Last page of the will with his signature.


Here is the transcript of the will:

And lastly I nominate, constitute and appoint my said son William Phillips of the city of Philadelphia, shoemaker, to be the Executor of this my Last Will and Testament…etc.

You can see the whole file HERE.

Well, after reading that, I was off to the races. I needed to find William, Jr. and Joseph  Phillips and their families.

I had already suspected who in Philadelphia was my William Jr. My suspicions were confirmed when I noticed he lived next-door to one of the men William, Sr. had made a loan to! William Jr. was a shoemaker and had his own shoe store, which is probably why his father didn't leave him money, but did leave most to his widowed daughter.

When I found Junior's death certificate, it contained the genealogical equivalent of the Holy Grail - his birthplace was noted as Portsmouth, England! 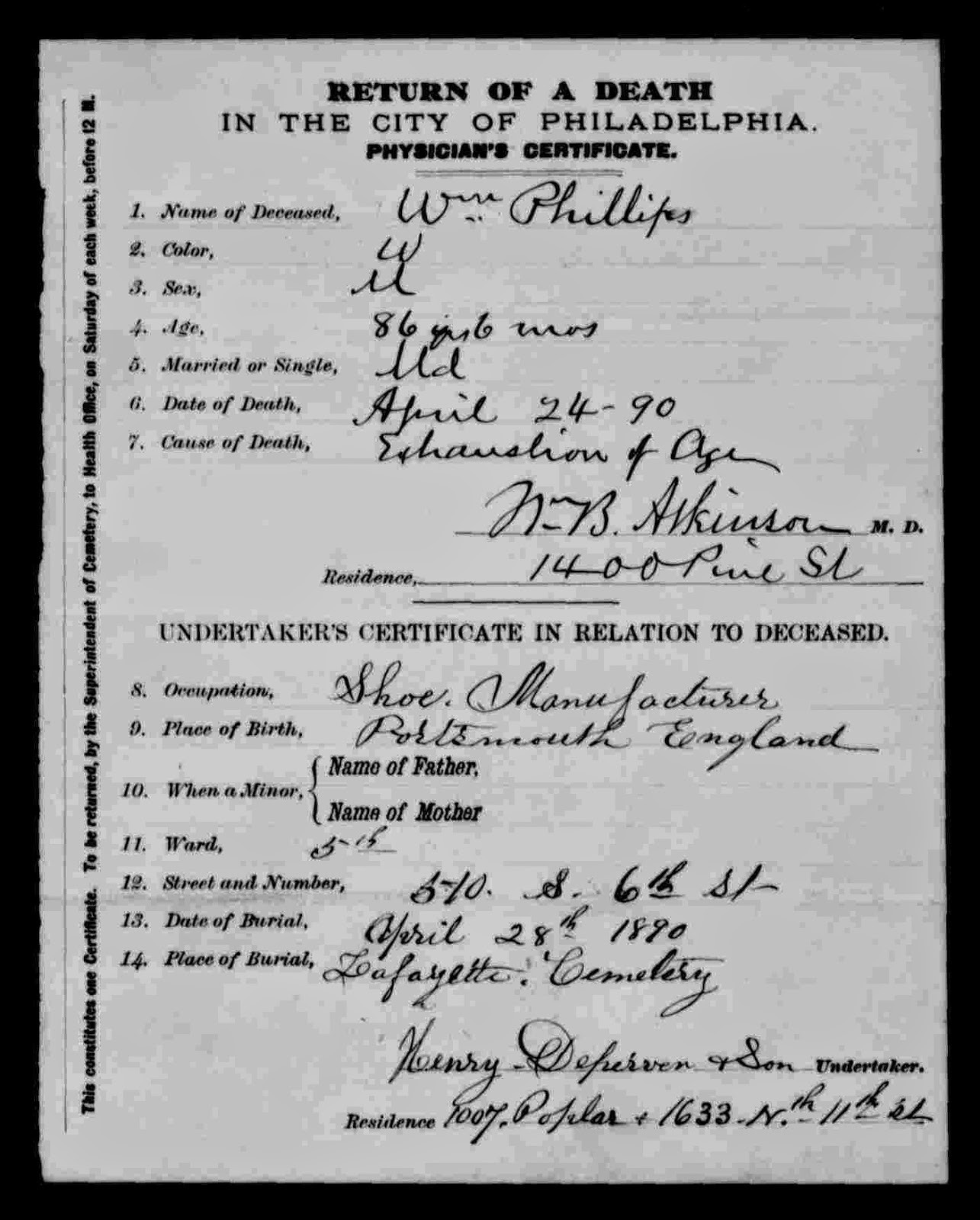 Joseph proved a little trickier, but I found him. It was very easy to know I had the correct Joseph Phillips when I looked at his children's names. They were: Richard (his brother's name), Caroline (his sister's name), and William (his brother's and his father's name). The farm was in the Troy township in Bradford County. I'll still need to find out how and when it was acquired.

So now I also have the signatures of William Sr., William, Jr., and my 4X great-grandmother Margaret Phillips thanks to these copies :-) I love collecting their signatures, they are so personal.


The moral of all of these stories? DON'T EVER GIVE UP!