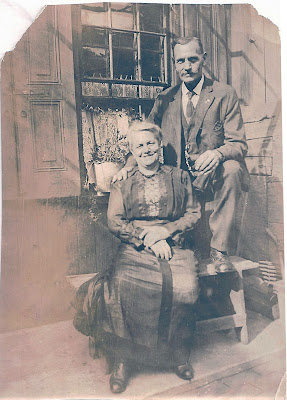 Sent to Germany 100+ years ago from our ancestor, Joseph Enz (Mimi's father), to his family back in the little haven of Drackenstein, these letters are giving some amazing insight into their lives. My earlier post about our Enz cousins that travelled there in 2009, finding another cousin, led to these letters returning from whence they came!  (You can read that post HERE.)


I found a wonderful lady, Nora Grosser (email), to translate one letter from 1893. You see, not only are they written in German, but also in old Gothic script! Talk about going cross eyed trying to read. I had picked up some of it during my initial research and can decipher names and a lot of terms used in church records, but conversational sentences are a different story! So thanks to Nora's expertise, the letter below has emerged:

The translation is:
_____________________________________________________________
Philada[1], April 28, (18)94
Dear brother and sister-in-law
I received your last letter and I saw that you are all healthy. Thank god we are also in good health, we always have work, the times are not the best, it has not been so bad since I have been in America. Thousands walk around and would work for food if they could get that. I have lots of news we come together every Sunday and play cards and drink---
(end of page 1)
---beer but everything at home since all inns are closed on Sundays. Dear brother you will have heard from brother-in-law Herbter that he was convicted because of selling beer on Sundays nobody is allowed to do that, he got 6 months in jail and a fine of 500 Dollar. It was his own fault, we always warned him, but it was of no use. Dear Brother if Ms. Rosenkranz will visit again---
Extra-sentence on side: Dear brother did you make sure a mass was read on the anniversary of Mother’s death day?
(end of page 2)
---next summer, I have a favor to ask you. You know perhaps that they had a piece of wood made of several parts, when put together it was one piece. You have to understand correctly what I mean, several pieces of wood half-cut and when put together then it is one. Maybe Isidor still has it. In case you cannot get it, please ask Kämenwirth to make one, pay what it costs. But you have to do it right away before Ms. Rosenkranz comes from Wiesensteig---
Extra-sentence on side: I did not get anything from Breuers.
(end of page 3)
---I enclose one dollar here so you can pay for it. Dear brother sister Sofie had some misfortune, at first she lost a child 4 weeks old and then one of her boys with 3 years now she also has got a girl with 2 years. Her husband had no work all winter long and is rough to her, he is a half crazy Xanikl.[2]
I will close now, many greetings to everybody farewell goodbye
Your brother and brother-in-law
Joseph Enz
Extra-sentence on side: Write soon so that I know you can get it[3].
(end of page 4)


[1]Philadelphia
[2] Regional word, most likely somebody who is quarrelsome
[3] Possibly the wood

How cool is that?! And just that mention of a brother-in-law named Herbter (Herbster) lead to some amazing discoveries! After sharing the translation with the Enz cousins, one of them, Jackie, forwarded a baptism certificate she has for her grandmother Rose (Enz) Giger - daughter of Joseph - that had a Theresa Herbster as a sponsor.


We knew sisters Christina & Sophia and brother August were in PA, but not anyone else!


Well, lo and behold, these tidbits led to more:


I looked in the newspaper archives and found an 1898  Philadelphia obit for a Wilhelmina Herbster, 58 y.o.,  wife of the late  John Herbster. Joseph Enz had a sister Wilhelmina, those ages match!  John died in 1895, his death cert says he was a "Gent" I think, but  the City Directory says machinist.
I found a NY passenger list for Wilhelmina Herbster, and 4 kids:  Marie, Angus, Theresa and Ann, arrival from Bremen June 13, 1884. It  is VERY hard to read, and the names aren't exactly right.
The administrator for Wilhelmina's estate was Charles J. Herbster,  was Wilhelmina's son, and was a butcher. He was born  1868 in Germany, married Mary Fischer in 1891. He died by 1930. Their  kids were:  Irene b. 1893  Charles Jr. b 1894 (still in Phila with his mom in 1942 per draft reg.) and  Marion b. 1895
I found a marriage license issued in Phila for a Rosie Theresa  Herbster & John Schneider in 1895. 1900 Census, has them in Phila with  2 kids and a 27 y.o. August Herbster as a boarder. In 1910, they are  in NJ. 1920 they have 6 kids and are in Vineland, NJ:
John & Rose (Herbster) Schneider had 5 natural children and 1 adopted  - they all worked in the bakery shop.  John F. b 1895  Minnie 1898  Helen C. b 1901  Edward C. b. 1903 in NJ ( m. Catherine in 1924 had 3 daughters),   Marie b 1908  and Matilda (adopted) b. 1913
They ran Schneider's Bakery for many years in Vineland NJ, with their  son John and are mentioned in "Prominent Families of New  Jersey." (Link HERE) John the son was widowed young  and had a son John Jr. Also, Rose's nephew John Herbster worked at the  bakery thru 1942 when he listed it on his draft reg.
(SIDEBAR: one of Joseph's letters dated 1921 says something about Rose Schneider geb.  (born) Herbster. A few words later, Wilhelmina is mentioned. It goes  on talking about Vineland NJ, but I can't read it. )
August Herbster is in Phila in 1910, married 5 yrs to Mary M., no  kids. He's a barber.
Another of Wilhemina's daughters, Mary married a George  Kurtschenkels in 1890, had 3 children. Mary died a horrible death in a  fire with one of her children (Charles, 7 mos.) in 1895. Another of  her kids, Hilda, died unmarried at 23 in 1918 (her father was dead by  then too), and a son, George,  b. 1891.
Since Wlhelmina Enz Herbster died in 1898, her husband died  in 1895, their sons August & John lived with Rosa Schneider in 1900.  Their other daughter Anne married Daniel Smith and was the victim of a  murder/suicide by her husband in 1909. No kids. Lots of tragedy in  this family.  (Links to the news articles are HERE and HERE.)
I then found another sister of Joseph's in Phila - Gertrude!  While looking thru Census for Herbster, I found:
John Herbster (Wilhelmina's son), b 1886 in PA, was living in 1910  with the Pulvermiller family as "nephew."
Then put this together:
Gertrude (Enz) married a John Pulvermiller @ 1879 had 9 children, 5  still  living in 1900. I found six:  Kate b. 1880 in Germany,  Englebert b. 1885 in Germany was a baker in Staten Island in 1920, (with  wife  Hilda & daughter Gertrude),   Gertrude Wilhelmina b 1886 d. 1886 PA,   August b 1888 in PA,  Clara b 1890 in PA (m. John Harker first, had a son Wm Percival; m. 2nd Wm DeSoi, 1  son Wm.  ), Alphonse b. 1892 PA, d. 1912 Phila, no kids.
Being bakers really ran in the family. Wilhelmina's daughter Mary was  married to a baker, and their surviving son, George Kurtzschenkels,  Jr. was also a baker before he was in the Navy. After that, he listed  his occupation as Yeast Salesman. He was married to a Caroline ca 1924  but no kids show up by 1930. She died in Phila in 1978.
So, again, pieces of the puzzle from different relatives, plus a bit of detective work and voila! You have a bigger family! Maybe we will find some other descendants that are out there as well someday.
Visit my website for more info:
www.pegslist.org
(Read website how-to HERE)
Subscribe via email in upper right margin of this page.
Posted by Peggy at 2:40 PM